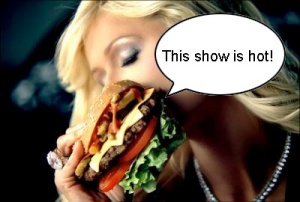 This was my first visit to Volitant Gallery and as I approached the space, and noticed the red velvet ropes and “Hollywood Premier” look of the exterior, I do have to admit I was a bit horrified. I didn’t know what to expect, but a big over the top fru-fru to-do is not my cup of tea.. I have to admit, having lived in Dallas for three years and having experienced more than my fair share of hollow superficial materialism, I have a bit of a bias against such things. The first thing I thought was, oh great, a pretentious new art space, full of stereotypical “Dallas” people.

Fortunately, I was pleasantly surprised to find that what I percieved wasn’t what I was getting… for the most part. The paparazzi was fake, the red carpet premiere; all a performance mockery of said stereotypes. The space itself on the other hand … hmm… marble floors is just a bit much don’t you think?

Some of what I perceived to be Ritzy over-the-top (and over dressed) snobs, I later found out to be participants asked to dress like that so as to be Paris Hilton look-alikes. The red velvet ropes and fake paparazzi were very tongue in cheek, once I realized their intent, however, real, honest to god snootiness was not in short supply. Art openings can bring that type out of the mahogany wood work. But, what can you do?

That being said, not everyone there was one of the elite drones completely unaware that they were being mocked on the walls. 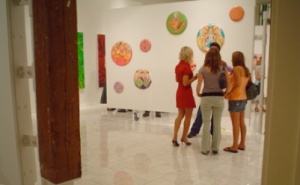 Speaking of the walls, let me break downs what was exactly on them. Terri Thomas’ work spanned in medium from digitally manipulated images, to large scale oil paintings, to video, to found object installations. Everything in the space delved into the theme of society’s superficial obsession with its ideal of physical beauty. Plastic surgery, over examination of one’s body and body image issues in general hung around the gallery like giant grotesque mirrors. Yes, there even were mirrors in the space. 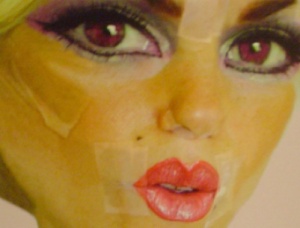 She seems to have chosen the varied media to fit a different goal in each series. Be it the digital manipulations that transformed the artist’s face into Barbie, Gwen Stefani or Angelina Jolie a la airbrushed magazine covers, or the deteriorating feel of the work in the smaller space in which Thomas used ground up water-based medium on oil. The perfect compliment to the later was the mini video piece which was a close up of maggots. Within the context of the whole show it was maybe the most beautiful if not disgusting piece in Volitant.

I was quite fond of the untitled found object installation of refurbished chairs and photos of said chairs. Thomas refers to the them in this show’s literature as being “objects with an erased history” tying it into the show’s theme.

The artist’s being a twin informs a large part of the body of work. The twin being a mirror, the over sexualized image of twins in our society is explored in many of the works as well. One of my favorite pieces in the show is titled “Monozygotic” and seems to heavily reference Frida Kahlo’s “Las Dos Fridas”, in which Kahlo discusses her own dichotomy; the duality of who she was at one point in life and who she was upon painting the double self-portrait. In “Monozygotic” Thomas and her twin’s images are painted in negative as if in the process of becoming a full fledged photograph. The twins touch hands as they do in most of her paintings, but upon close inspection, the viewer notices that the twin on the right has “imperfections” that the twin on the left does not. 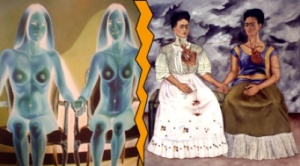 In all, this was an intriguing show that explored our obviously beauty-obsessed culture, and had fun mocking a lot of those who buy into it, however, I’m not sure everyone there was aware that they were looking into their own mirror as they laughed at their own hideous hidden desires. •